Any questions please direct them to your class teacher:

After completing their SATs this week Year 6 had a fun Friday at Jubilee Park.

Congratulations to Evie and Marli of 6O whose writing about World War Two has been selected for display on the Lake District Holocaust Project website as part of a National Literacy Trust initiative. Children from across the UK were challenged to write their own piece based on the work of author Tom Palmer.

Year 6 have been working on the school bus this week in Science. They used their knowledge and understanding of electricity to try and get bulbs to light in order to fix the lights on the bus!

"It was great working in a fun environment and trying to solve the problem of the bus lights not working." Rahjay 6P

"I  felt like an electrician trying to fix the bus lights - we had to make a circuit to try and turn the light bulb on." Ayden 6P

"I now know how to light a bulb using a battery, wires and a bulb and battery holder." Tiarnah 6P

This half term, Year 6 have been exploring the idea of ‘Make do and Mend’ in our D&T lessons. They used old clothes and materials to make a bag. At the beginning of the topic, the children looked at different types of bags and investigated, who and what they were made for and how they were made. They then practised different stitches for them to use in their final bags. Once the children had designed their bags, they made a paper pattern which is a template of their final design to see if their design would work. Finally, the children got to make their bags – the children all made a bag and they were really proud of their final products (as were the teachers). I’m sure you will agree that we definitely have some future bag makers in Year 6!

Year 6 have been finding out about inspirational North American women and have made presentations summarizing their lives and work. 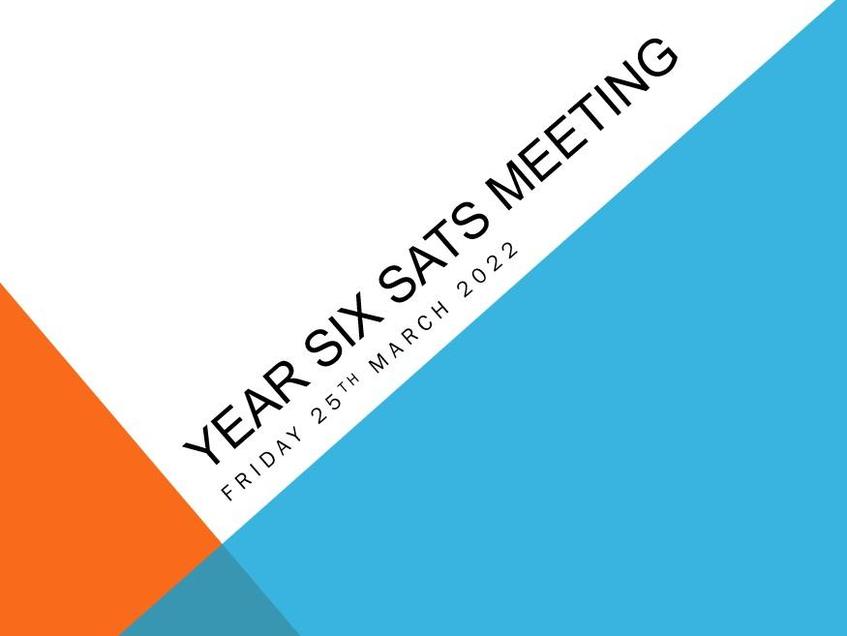 On Friday 18th March, some children from Year 5 and 6 went on a trip to the Royal Albert Hall.

The first thing we did was take a bus and the underground train and when we arrived in Kensington we walked towards the Royal Albert Hall. On our way, we saw very posh and modern apartments and houses.

Finally, we arrived and we were shocked to see that the building was beautiful and circular-shaped. We all sat on the steps in front of the Royal Albert Hall, took a photo and admired the wonderful view.

Straight after that we split into groups and had an amazing tour of the inside of the building. Inside the theatre was huge and if you looked up you could see a glass domed roof holding its own weight. Right under that were mushroom-shaped things which stopped the echoes during concerts. Also on the tour we saw the Queen’s box and a picture of her with Nelson Mandela.

When the tour was finished we had a scrumptious picnic lunch under the bright, warm sun. Then it was time for the best part which everyone was looking forward to – the classical music concert.

The orchestra began and we listened to the music. We heard opera singers and a guitarist and there were colourful lights which created surprising patterns. When the concert was finishing, there were indoor fireworks which were amazing too.

After the concert we went back to school on public transport. What an incredible trip to the Royal Albert Hall.

6P took part in some fun activities this week to help learn their weekly spellings - these included timed challenges and spelling relays.

"It was really entertaining and fun way to learn our spellings." Dailyx 6P

"Looking at the cards and working as a team helped me to remember the longer words like inception." Mustafa 6P

"I'm going to try the timed challenge at home and try and beat my score!" Tiarnah 6P 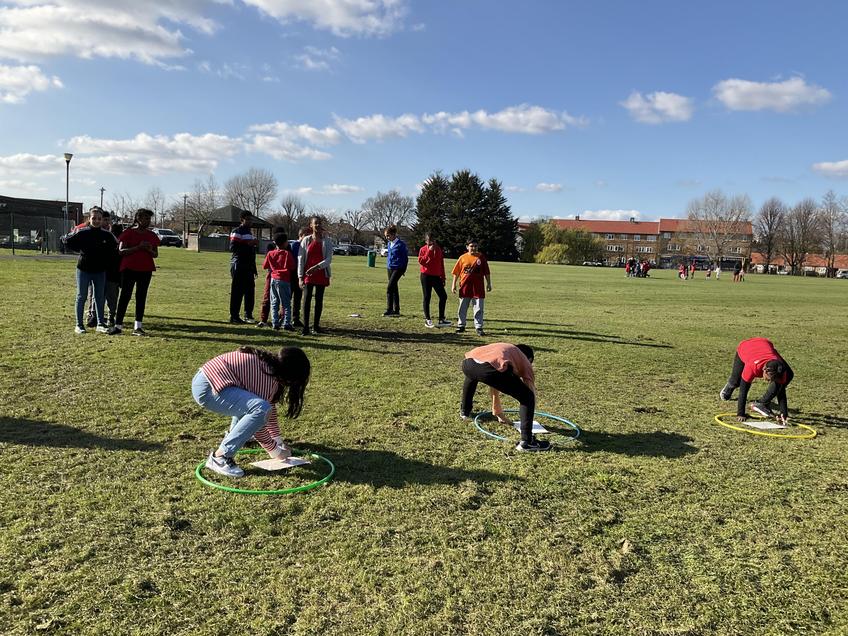 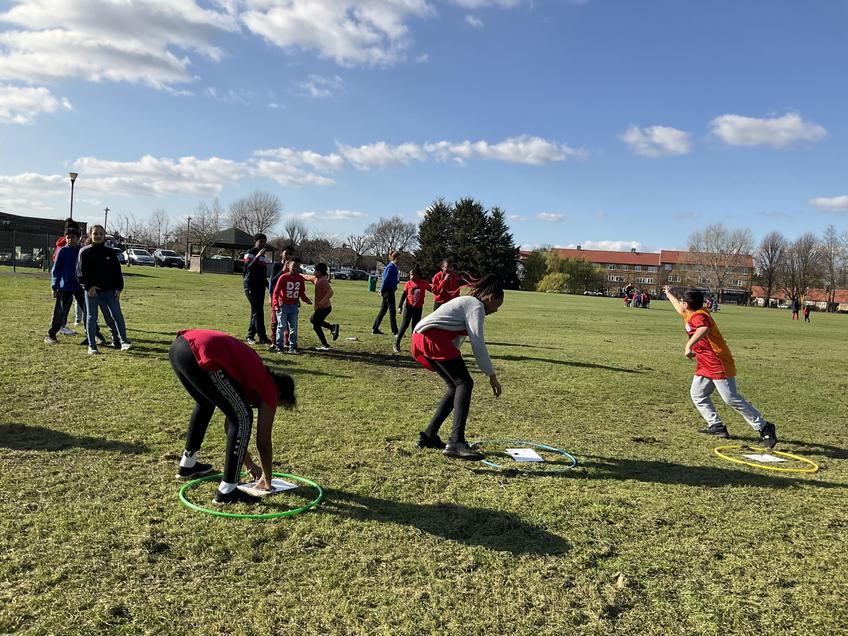 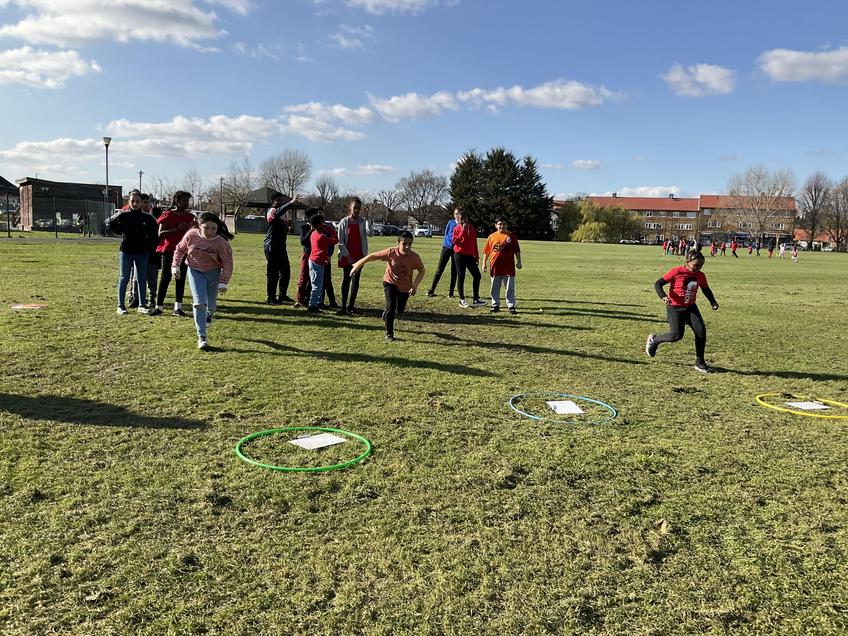 This week in Science Year 6 have been looking at real life examples of Refraction in Action! 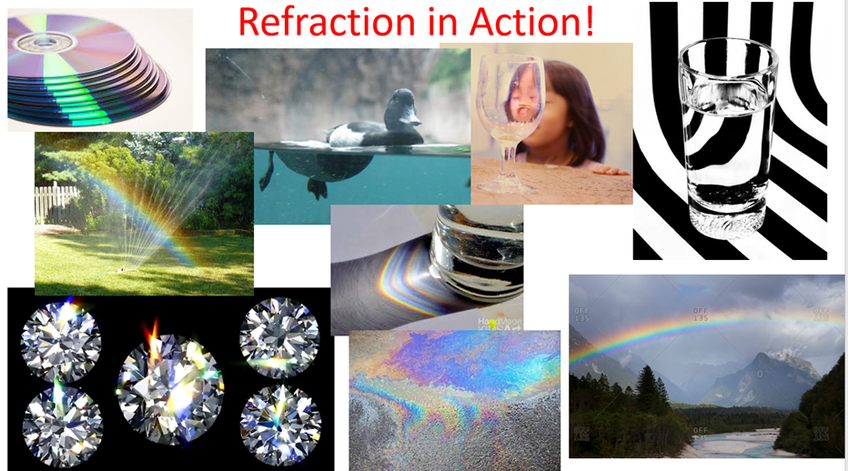 There’s also a link to an activity where you can make the colours of the spectrum: red, orange, yellow, green, blue. Indigo and violet, disappear. Have a go at home!

Year 6 are obsessed with this Geography game, which is updated daily. You need to guess a different country in the world by using the interactive globe to help. Warning: this game is seriously addictive! 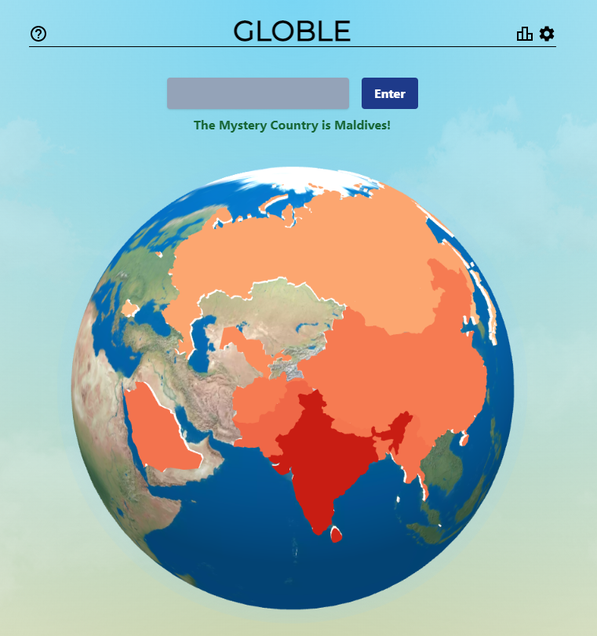 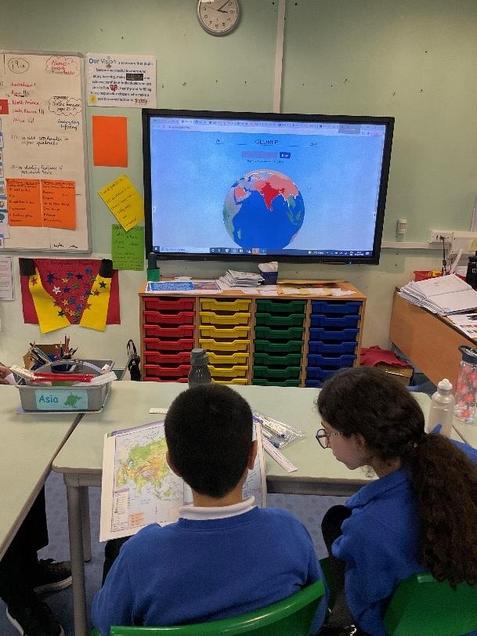 Every day in class, we have been playing a game called Globle. It helps us to remember the names of countries and where they are located in the world. The goal of the game is to guess the country with the least guesses but you need teamwork and knowledge of the world to do that. After each guess, the country is given a colour depending on how close it is to the mystery country (the dark red means you are close to the country). Although we can only play it once a day, it is still fun to keep guessing countries with your classmates. I don’t know about you, but I really enjoy this game!

Below are a selection of some of the writing that Year 6 children have been working on in their English lessons.

This week to celebrate World Book Day, the Y6 children watched a live event from the Cambridge Theatre in London – home of Mathilda The Musical. Many authors such as Cressida Cowell, Humza Arshad and Frank Cottrell-Boyce entertained the children by describing how they went from loving reading to writing their own books. They also read extracts from some of their books to inspire the children to use their imaginations to write their own stories.

We learnt how to calculate the perimeter of rectilinear shapes. As our tables are rectilinear, Mrs Panayi wrote down the length and width of 1 table. We had to work out the perimeter of the whole table by finding out the missing lengths. We had a lot of fun writing on the tables. We are all great mathematicians so we worked out the perimeters correctly! We were also challenged with some ‘always, sometimes, never’ questions. The cleaning up was just as much fun as writing on the tables.

In D&T, we are exploring the idea of ‘Make Do and Mend’ by making a bag from old clothes. This week we were practicing our stitching skills. We learnt how to do the running stitch and the back stitch. We surprised ourselves at how much we improved in just one lesson and left feeling very proud.

During our studies in our Light topic, we have made a periscope. This uses the properties that light travels in straight lines and light can be reflected to help us see over objects, around corners and maybe even spy on each other!

Did you know that there are 23 countries in the continent of North America? Check with the Y6 children as they will be sure tell you this fact. This week they have been learning about the 23 countries and their capital cities. They have been busy ordering them in terms of population and area too.

This week, Year 6 took part in a live webinar about living things.

We also found out some interesting facts including:

Thank you to STEM learning

Year 5 and 6 took part in a live webinar this week on Earth and Space.  They learnt many interesting facts and had the opportunity to ask some scientists various questions.

The children met a scientist who studies astrophysics and works at the Science Museum. She is currently studying a new planet called 55 Cancri e which is a planet that doesn’t spin.  This means that it is always daytime on one side of the planet and always night time on the other.  She thinks that the surface of the planet may be lava.  In 2029, they will be launching a telescope to find out what the air is like on this planet.

The children also met another scientist who works in a planetarium as a presenter.  She discussed the following questions:

Thank you to STEM Learning 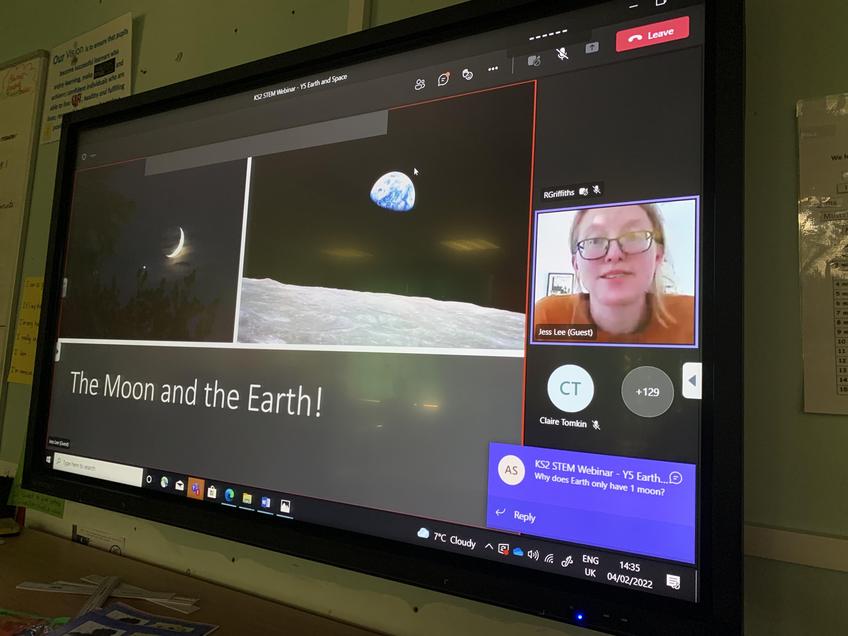 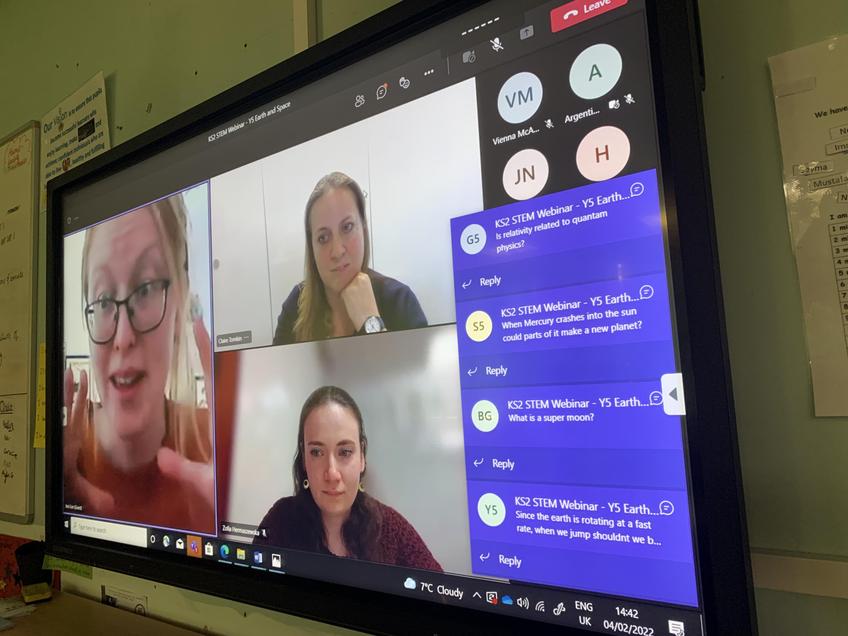 This week Year 6 donned their lab coats and were completing a vocabulary activity about their topic on ‘Light’.

Who knows there could be a future scientist in our midst.

In History, we have been learning about World War Two. We looked at different sources and identified whether they were primary or secondary. Here are some photos of us trying on the helmets and gas mask box. We couldn’t believe how heavy the helmets were and we didn’t realise that people had to carry their gas masks with them at all times. 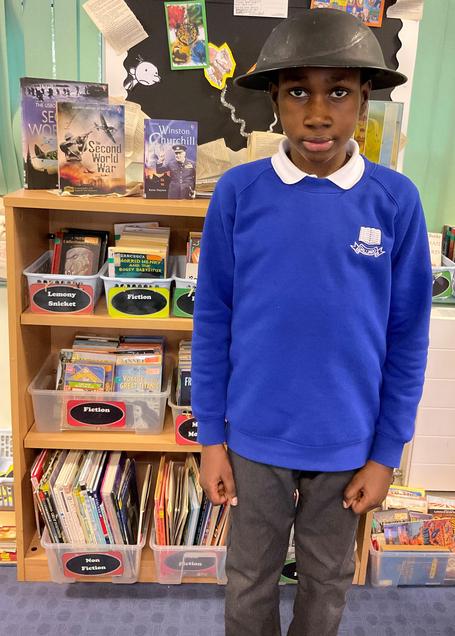 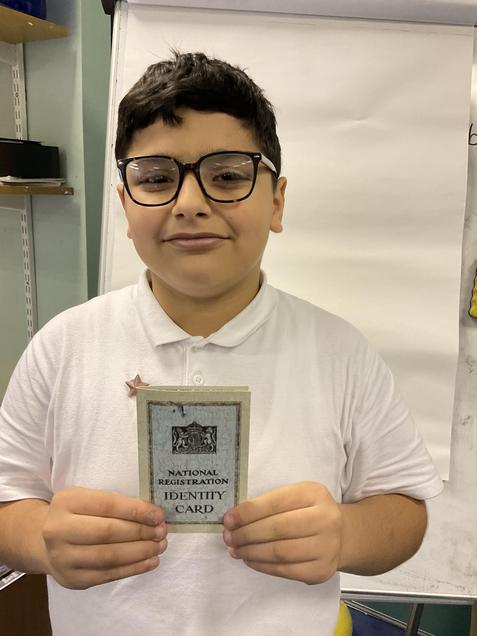 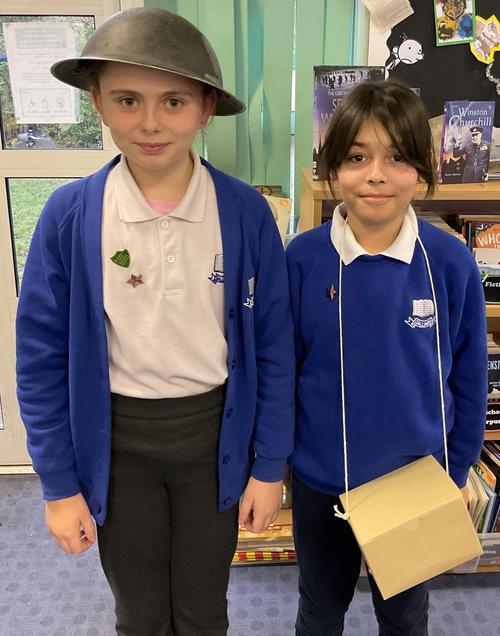 Year 6 have been reading a short story called ‘Them’ written by Tom Palmer in our reading sessions.

It is about a group of Holocaust survivors who arrived in Windermere, Lake District.​

Tom has written it to try to show how different people react when refugees arrive in a place where other people already live. On Thursday, we enjoyed a virtual visit with Tom Palmer and a Holocaust survivor Mala Tribich.

It was fascinating to hear her story and we all felt emotional listening to the horrors that she faced.

Thank you to the National Literacy Trust for organising this. 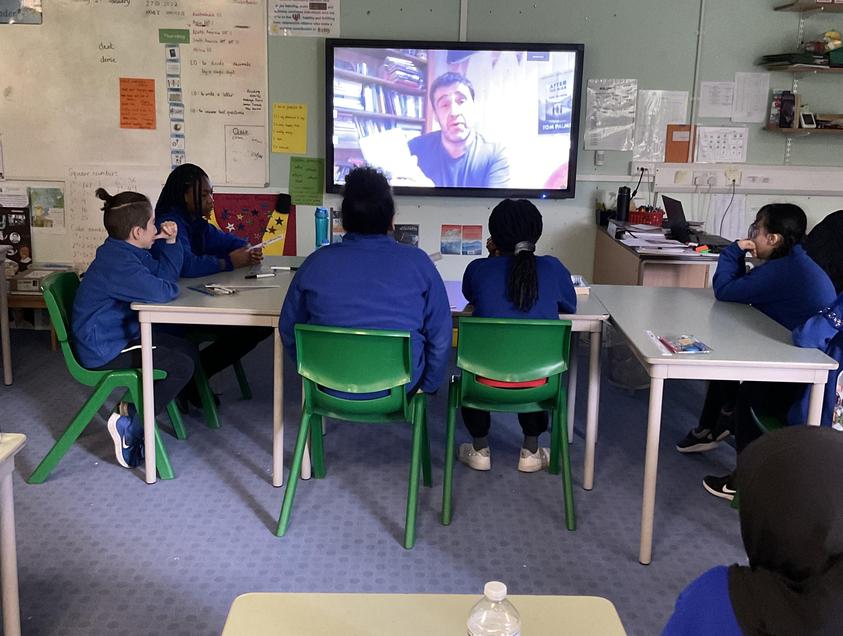 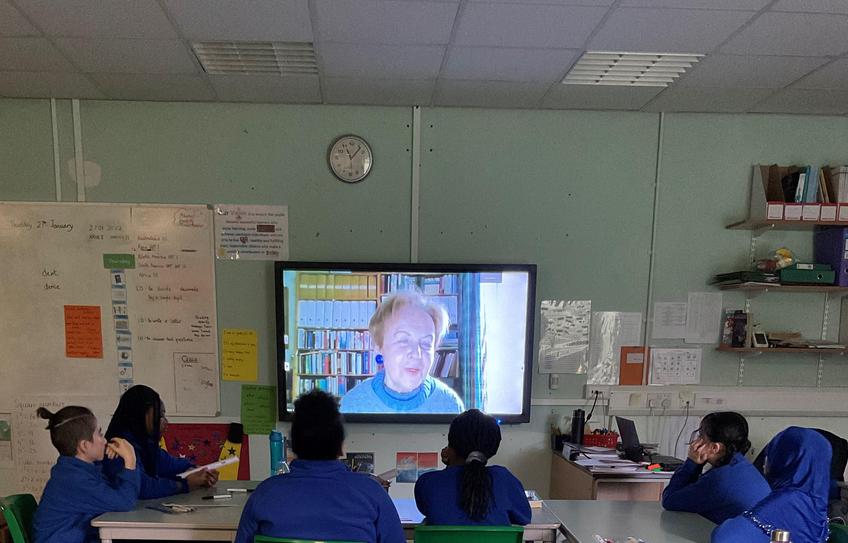 In Art, we have been learning about New Media Art which is art that is made using non-traditional media.

We had a go at creating a pixelated, abstract image by choosing colours to match the theme and then using different shades.

Here is some of our work. 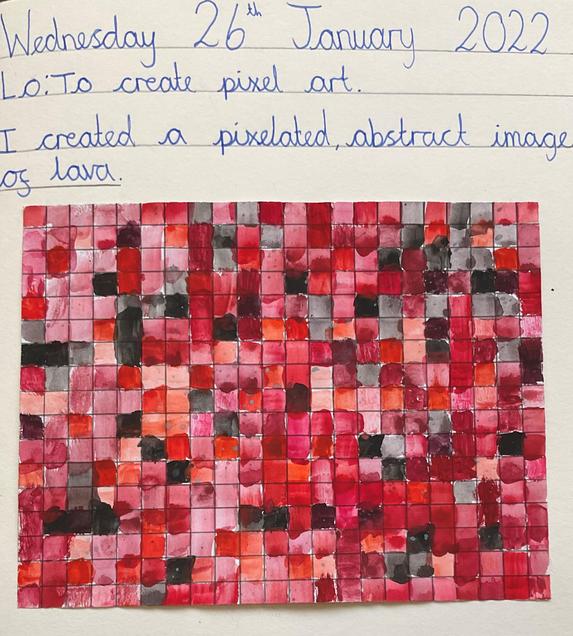 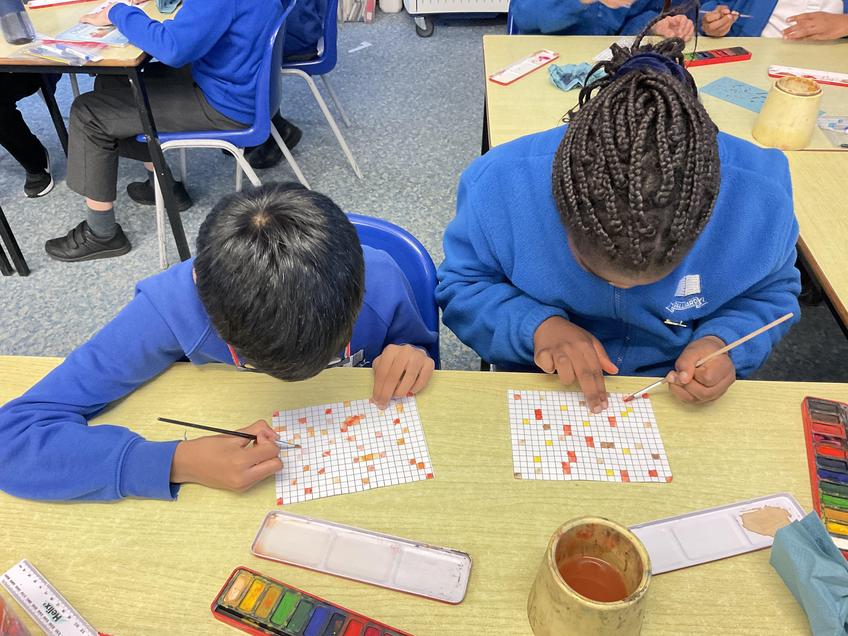 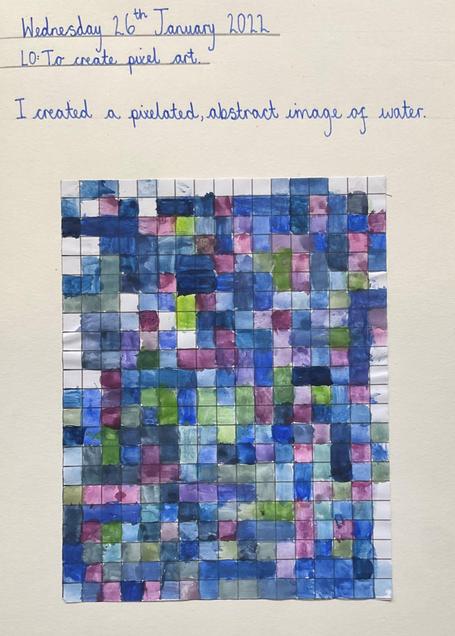 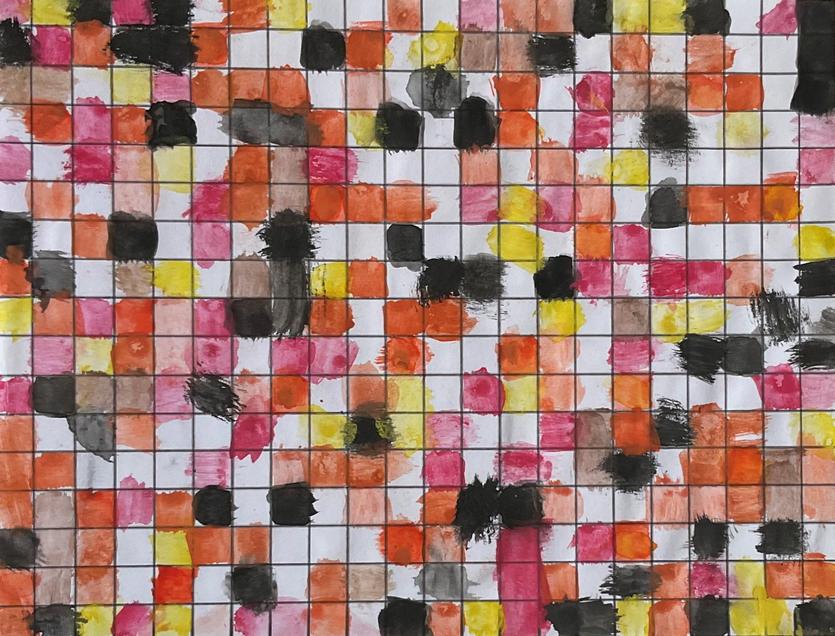 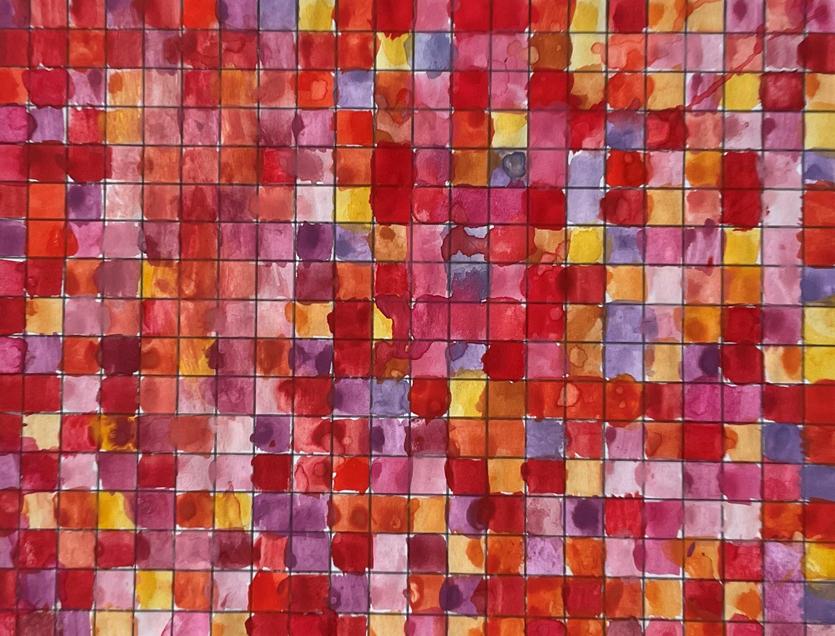 This week Year 6 have been logging on to a new piece of software called Literacy Planet.

It can be used in school or at home to help support Grammar, Punctuation, Spelling and Reading. 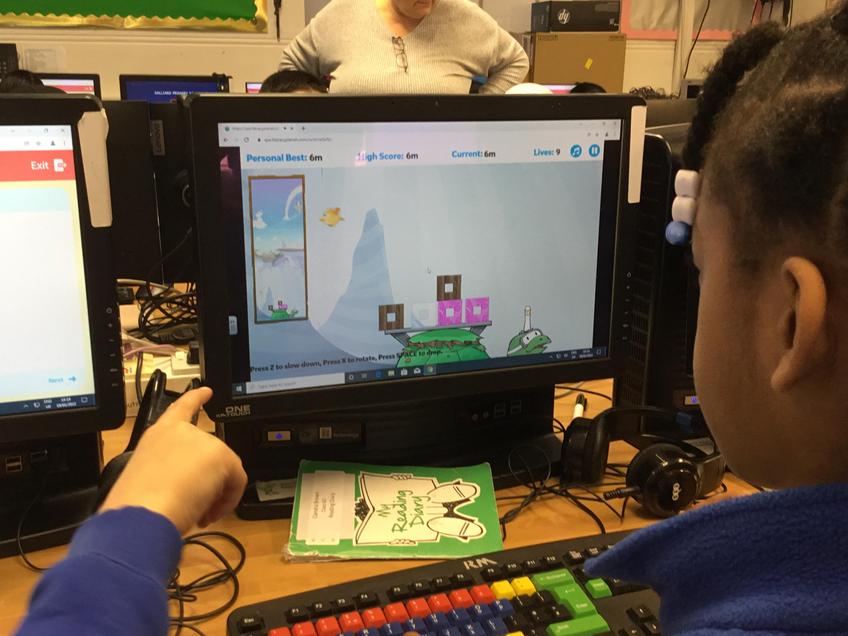 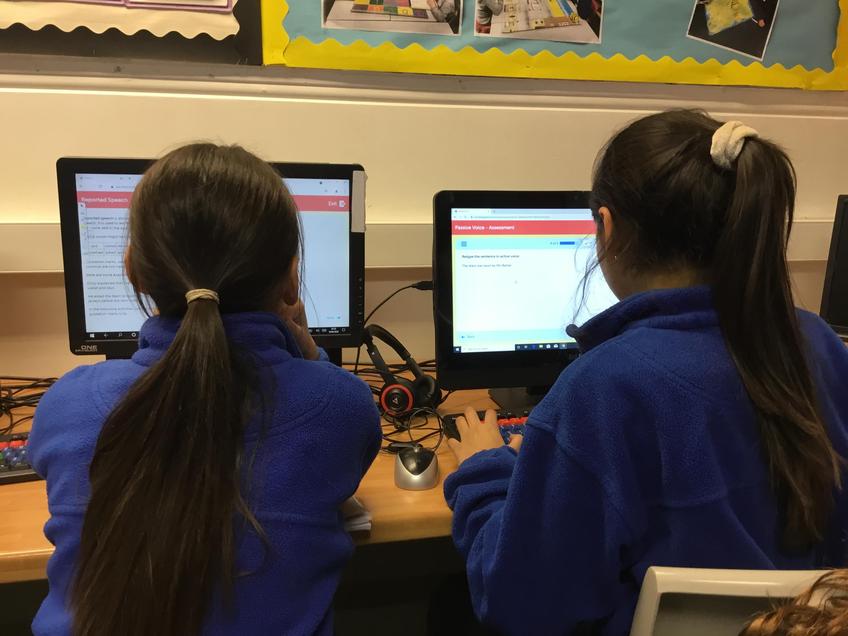 During the studies of Judaism in Year 6, the children have been learning about the festival of Rosh Hashanah.

They have been learning about the different customs which Jewish people follow at this time.

These include: the solemn responsibilities of repentance and forgiveness and also celebrations where favourite foods, such as apples and honey and challah, are shared.

The children enjoyed their own Rosh Hashanah event in school. Shanah Tova!

Unfortunately not the ones with chocolate chips.

Some cookies are necessary in order to make this website function correctly. These are set by default and whilst you can block or delete them by changing your browser settings, some functionality such as being able to log in to the website will not work if you do this. The necessary cookies set on this website are as follows:

Cookies that are not necessary to make the website work, but which enable additional functionality, can also be set. By default these cookies are disabled, but you can choose to enable them below: